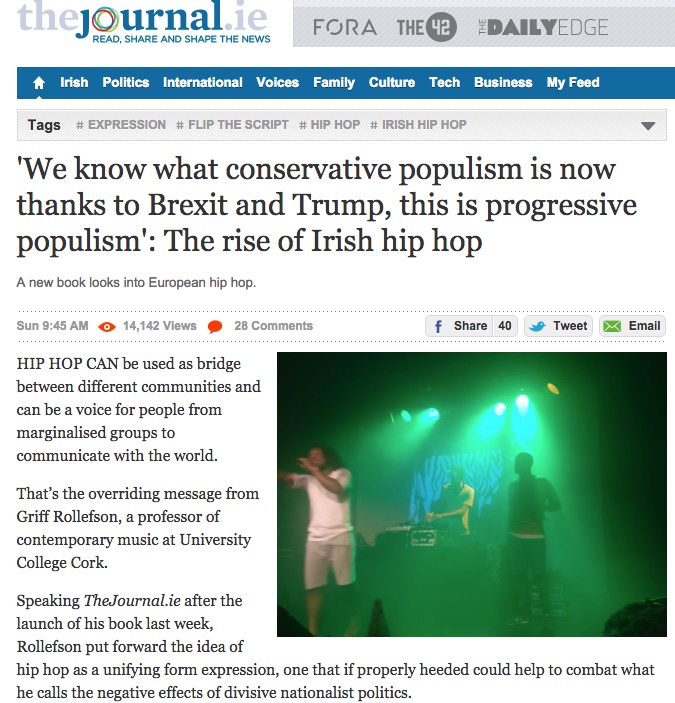 The book – Flip the Script: European Hip Hop and the Politics of Postcoloniality – positions European hip hop as drawing strongly from the influences of the United States to relay the experiences of those outside of the main narrative of a nation.

In Ireland and in other countries this means immigrant and working class voices reflecting their experience here.

But here it can also includes artists expressing the Irish post-colonial experience of living in a country that was once under British rule and still dealing with the after effects of that almost 100 years after independence.

For Rollefson – who emigrated to Ireland from the US four years ago – similar themes are evident in Irish music as would be in the kind of underground music coming from the US reflecting (mostly) the African American experience there.

“But then I got to Ireland and it became very clear that I was still thinking about race, because I could hear – you know from an ostensibly white population – very much the same experience,” he says.

The feeling that even now in a post-colonial country a hundred years on, Irish hip hop artists are talking about so many of that same things: the feelings of self-doubt – I heard that a lot – but also these histories of diaspora, of oppression, of colonisation

The Irish hip hop scene is currently in the middle of an upsurge, with a large number of groups pushing the envelope when it comes to the kind of work they are creating.

In a companion site to his work, Rollefson provides a playlist featuring a mix of the top artists performing in Ireland right now.

These are the artists who he says illustrate a reworking of the dominant narrative of Irish history.

These rappers come from many different walks of life and incorporate many aspects of Irish society.

Rapper and performer Temper-Mental MissElayneous, whose work explores a wide range of themes and influences, including the position and history of women in Irish society.

Rollefson also includes the rapper John Tzu, whose work focuses on the Troubles in Northern Ireland and the hugely complex existence that people both sides of the divide have had to lead there.

Another act featured is the trio Rusangano Family – who won the RTÉ Choice Music Prize in 2017 for their album Let the Dead Bury the Dead. The African-Irish trio – God Knows, MuRLI and mynameisjOhn –  fuse world and afro-music beats with lyrics that deal with the issues of identity, the experience of being an immigrant, isolation as well as artistic expression and inspiration.

On top of these, Ireland features a wealth of diverse hip hop acts who enjoy both local and mainstream success, including (but certainly not limited to):

The selection above gives a small example of the diverse nature of the work coming out of Ireland in terms of hip hop today. But despite this seeming difference in terms of content and background, Rollefson argues that if you look closely a lot of the same themes are being explored.

“Immigrant communities and working class communities are up against a lot of the same things,” says Rollefson.

“Sometimes they can be at each other’s throats when pushed by isolationist Brexit-type rhetoric… But then on the other hand hip hop is a space where working class Irish people and immigrant communities can come together.

That’s the space where it’s a shared struggle, shared understanding, and it’s an exciting time.

As he notes, hip hop can become the “shared space” where different communities can meet to exchange ideas.

“We know what conservative populism is now thanks to Brexit and Trump, this is progressive populism,” he says.

This is where working class white kids and immigrant families and communities can really find common ground.

Rollefson says that in academia this meeting point is known as “the third space”.

“You have ‘your own thing’ and they have ‘their own thing’ but here is a third space where [for example] different communities can find common ground,” he says.

“They’ll say: ‘ you take some of your culture, I’ll take some of my culture and we’ll create this third culture which is global hip hop’.

To me that’s really the hope and the promise of this type of music.