“Detailed, innovative, and exhilarating…  At last we have a critical survey that can match the complexity and power of the music.” –Paul Gilroy, author of The Black Atlantic

“Simply stated, this is a powerful book with a killer flow.”  –Murray Forman, author of The ‘Hood Comes First

“highly original and ambitious, and a substantial contribution to research on hip hop and postcolonialism.” –Thomas Solomon, University of Bergen

“a must-read for hip hop fans that are seeking to broaden their horizons and understand how hip hop is being made and consumed in Europe… Rollefson has crafted a book that is very readable, and helps build a base knowledge that will leave you hungry to learn more.” –Chi Chi, ScratchedVinyl.com

“Taken as a whole, Flip the Script is an innovative and dynamic piece of scholarship that lays a valuable foundation for future work connecting the fields of hip hop and postcolonial studies.” –Meghan Drury, Journal of Popular Music Studies

“a dynamic and detailed examination of hip hop scenes in Berlin, Paris and London… moving beyond the one-sided narrative of cultural imperialism and imitation, but also beyond the more complex model of creolization.” –Karim Hammou, Journal of World Popular Music

“a dense and ambitious book that will be valuable to a vast array of scholars. It will be particularly useful for those interested in European Studies, as it casts light on the postcolonial and racial dimensions that are often omitted from the analysis of European identities.” –Séverin Guillard, University Paris Est Créteil, EuropeNow (Journal of the Council for European Studies)

“This engaging and provocative study helps to show how music can outline the cultural dimensions of ethnicity and race in the modern Western world.” –Telegraph Books, Books.Telegraph.co.uk

“Rollefson achieves that rarest of outcomes: a true exchange between artists and academics, guided by at times uncanny convergences of thought across time and space… the future of music research.” –Nicholas Stevens, Case Western Reserve University, Notes: Quarterly Journal of the Music Library Association

To Read all the Endorsements and Reviews, click here

ABOUT FLIP THE SCRIPT

What does twenty-first-century Europe sound like?  Let’s have a listen.

This book examines how the children and grandchildren of immigrants from the former colonies and peripheries of Europe are employing the African American musical protest strategies of hip hop both to differentiate themselves from and relate themselves to their respective majority societies. Drawing on music, media, observations, and interviews from fieldwork in Paris, Berlin, and London (as well as a conclusion centered in Cork, Ireland), this book situates musical analyses in the postcolonial and globalizing contexts of the three cities, demonstrating how this black American music structures local concerns and enables syncretic expressions that are at once wholly local and definitively global. It concludes that hip hop is both a product of the postcolonial contradictions that hyphenate citizens within their own nations and a form of cultural politics well suited to flip the script on the inequalities those hyphens imply.

Hip hop’s music, poetry, and style remain exhilaratingly fresh as the culture continues to spread to every corner of the world. Yet, in continuing to be dazzled by hip hop’s globalizing novelty as it expresses new collisions of local and global cultures we have a tendency to buy into the narrative that this thing called “globalization” is something new and unprecedented. As the postcolonial frame continually reminds us, it is not. If nothing else, the field of postcolonial studies asks us to rehistoricize globalization in all its contexts from exploration, encounter, and exploitation, to structures of racialized imperial dominion, the rise of global capitalism, and its continuing technological disintegration of our borders. Never have the continuities between postcoloniality and globalization been clearer, as Europe faces a post-Brexit realignment and the nations of the world figure out how to liberate goods, capital, and media while limiting the flow of people. This book thus shows how hip hop sits at the confluence of dehumanizing neoliberal globalization and the gritty human realities of postcoloniality. What’s more, it offers a much-needed critique of the binary of neoliberal capitalism versus ethnoracial protectionism to which Western political discourse has been reduced in, this, our post-truth era.

In Europe’s present context of perpetual crisis (that is always already racialized)—from refugee “crises” and constant fears of terrorism to the rise of neonationalist parties, the isolationist Brexit fruits they bear, the normalization of boom-and-bust economics, and the new reality of permanent austerity—it is the sons, daughters, and grandchildren of settlers from the former colonies and peripheries of Europe who are on the front lines and are best equipped to offer new insight into current affairs… if we have the sense to listen. And make no mistake; these local insights will take wing on the global commercial networks of popular culture through the sonic force of hip hop.

What does twenty-first-century Europe sound like?  Let’s have a listen. 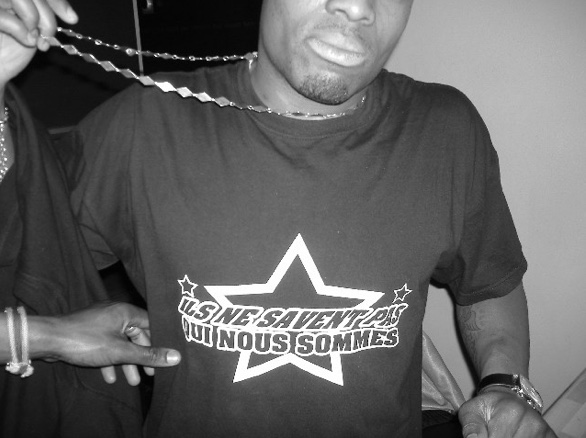 “They do not know who we are” — Xiao of Blackara (Paris)

FREE COPY OF FLIP THE SCRIPT?

A lecturer at University College Cork has been given a €2m grant to study rap music and hip-hop culture over the next five years. pic.twitter.com/MlwyqJFeKR

Interview about CIPHER on RTÉ’s Morning Ireland – Click Below

For the *Book Blog* and other news and announcements click here.

You can find more at Griff’s (old) webpage here.

Also by the Author

See Menu above for chapter details, resources, media, and more.